Why ‘Slogging It Out’ Ain’t Always The Answer: A Leadership Lesson From My 6 Year Old 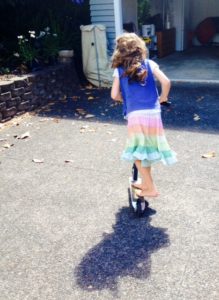 I’ve spent a large part of the ENTIRE HOLIDAYS watching my six year old practice bunny hops on her scooter.

Despite the dozens of hours of effort, she was making very little progress. It was excruciating to watch, let alone for her to experience.

Cue stage left, her older brother (aka scooter pro), who up until this moment had been completely disinterested in her scootering efforts.

In the casual nonchalance that only a nine year old can pull off, he offered to show her a crucial ‘technique’ tip, demonstrated it once, then sauntered off.

The difference in her bunny hop expertise in the next instant was profound. With just one tip from the Master Scooterer, her skill level catapulted – and the last time I looked she was merrily bunny hopping her way to Timbuktu.

Sadly, too many leaders in organisations are following Sienna’s example. There’s a belief dictated by a ‘solitary grind’ or ‘head down bum up’ type of mindset. It tells us that if we just knuckle down and work/strive/push harder/longer/better, we will become a master at whatever it is we are trying to accomplish i.e. the hugely ambitious profit target, the problematic project, the non-performing employee, or the difficult working relationship.

Whilst effort and perseverance are critical performance factors, they’re not the only ingredients to nailing a gnarly scenario. Sometimes taking a different tack, adopting a completely new approach, or even consciously learning vicariously can be the key to mastery.

In their book, Decisive, authors Chip and Dan Heath suggest we look to other people, industries or companies who have faced our problem and see what they did. Simple, huh? BUT…

How often do you invest time researching your ‘unique’ situation?

How often do you seek expert counsel for the ‘thing’ you are grappling with – particularly if they are outside your organisation, you don’t know them, or (dare I say it), may even live in another country?

Are you, like Sienna, trying to do it all alone?

Just one nugget of sage advice can be the difference between mastery and burnout.

Who (or what) is your ‘scootering pro’?