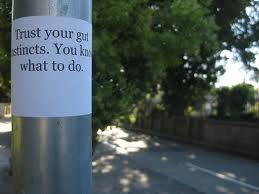 The topic of gut instinct can easily fall into the eerie-soft-and-fluffy-hippie category.

And I can understand that. Lots of people are turned off by the thought of tuning into that deep, intrinsic ‘knowing’ we are all said to possess.

Take my husband for example. I can just imagine the look on his face if I were to say “just trust your inner voice honey”. He would probably roll his eyes and give me that “sometimes I wonder what planet you come from” look.

In organisational settings it can be particularly hard to justify a ‘gut instinct’ decision. Rocking up to the next management meeting as a senior leader and saying you don’t support a particular strategy because “it just doesn’t feel right” ain’t gonna cut it.

But before you dismiss using gut instinct in your role as a leader, consider this. There is literally tonnes of scientific evidence to support gut instinct as a real and effective tool in decision making.

For example, a  study by Canada’s University of Alberta discovered when it comes to working out where the future lies (i.e. when making decisions) your unconscious mind is both smarter than you think and can be a great motivator.

Another experiment conducted by Prof. Marius Usher of Tel Aviv University’s School of Psychological Sciences and his fellow researchers, found that intuition was a surprisingly powerful and accurate tool. When forced to choose between two options based on instinct alone, the participants made the right call up to 90 percent of the time.

A report in the Journal of Organizational Behavior and Human Decision Processes by researchers from Boston College, George Mason University and Rice University, says that intuition may be just as effective in decision-making as an analytical approach.

“It turns out intuition isn’t always bad and there are conditions where it is a good way to make the right decision,” said co-author Michael Pratt.

And with hindsight, many of the best decisions I have made in both my professional and private life have been when I have followed my gut response to a situation, even when everything on the surface has pointed towards a different path. Conversely, when I have dismissed that ‘niggling, difficult to quantify and just can’t put my finger on it’ sentiment, more often than not, I have come to regret it.

I’m not suggesting we should base all of our decisions on intuition. But, when you have researched, compared, analysed, weighed up the pros and cons, and done your due diligence, perhaps tuning into your subconscious mind and simply trusting your instincts to guide the decision making process could be an option worth considering.

What do you think? Is gut instinct a feasible tool that leaders can harness?